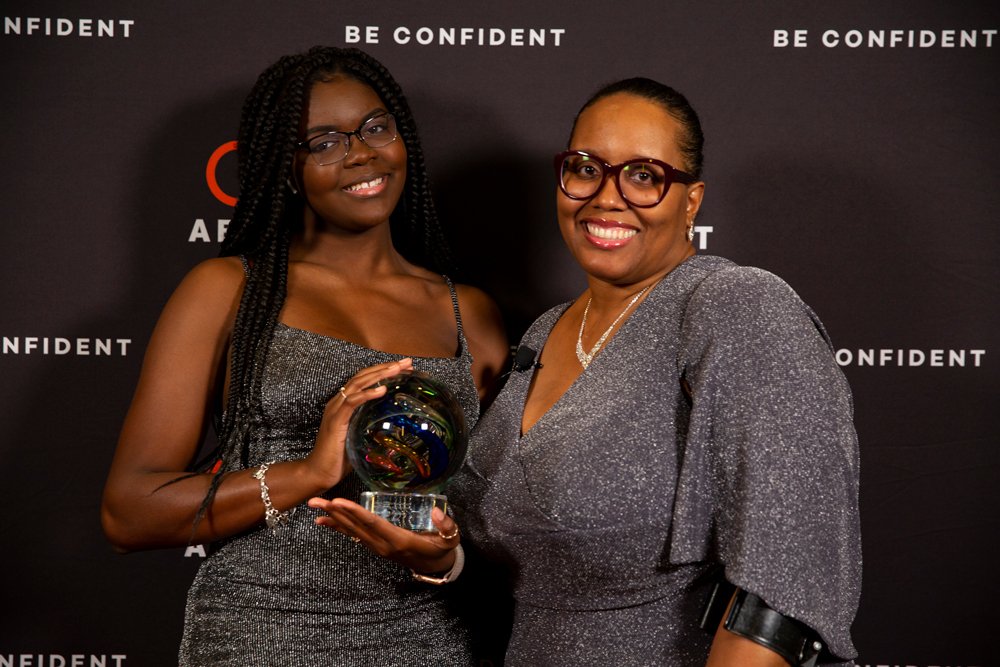 The Claire L. Felbinger Award for Diversity and Inclusion is presented to recognize U.S.-based educational units, individuals, associations, and firms for extraordinary success in achieving diversity in the technological segments of our society. As a Public Member on our Board of Directors from 1998 to 2004, Claire L. Felbinger was a driving force for inclusion and led the first committee to formally bring the issue of diversity to the attention of the Board.

She was a tireless advocate for efforts to promote diversity and set in motion the work that is still being done today. Under her leadership, the Public Member Committee launched initiatives to consider and publish ABET Expert diversity statistics, issue a formal policy on diversity, and create the President’s Award for Diversity in 2005.

Dr. Felbinger passed away suddenly in her home on May 28, 2008. To honor her legacy, the award that she helped create now bears her name. Yvette E. Pearson, Ph.D., is Associate Dean for Accreditation, Assessment & Strategic Initiatives in the George R. Brown School of Engineering at Rice University. A Fellow of the American Society of Civil Engineers (ASCE), she chairs ASCE’s Formal Engineering Education Committee, a subcommittee of the Committee on Sustainability, and has provided leadership in advancing the global agenda for sustainability in engineering education. She is vice chair of ASCE’s Committee on Diversity and Inclusion and was the 2018 recipient of ASCE’s Professional Practice Ethics and Leadership Award “for her role in the development of Canon 8 of the ASCE Code of Ethics and for emphasizing ethics education and mentoring throughout her career, her embodiment of professional ethics, and service to the civil engineering profession.” Pearson is a registered Professional Engineer in Louisiana and serves as a Program Evaluator for the Engineering Accreditation Commission of ABET.

The Claire L. Felbinger Award for Diversity and Inclusion, like all other ABET Awards, is given to a nominee selected by his or her peers. To learn more about the process and criteria involved, or to nominate one of your peers, download and review the nomination kit below. The deadline for nominations is April 20th, and only complete nominations with references will be accepted.

For outstanding vision, commitment, and progress in the recruitment, retention, and empowerment of women in computer science and software engineering. Learn more.

A dedicated educator who works to enhance the success of students from underserved minority communities and a thought leader who shifts the paradigm of engineering education to build a diverse and inclusive workforce. Learn more.

For tireless, long-term advocacy of diversity, for leadership throughout her career mentoring and promoting underrepresented colleagues and students and for founding the Engineering Ambassadors Network with its outreach emphasis. Learn more.

In recognition of the Anita Borg Institute’s outstanding commitment and contributions to increasing the representation of women technologists in the global workforce and its worldwide impact on enhancing technology. Learn more.

For visionary leadership as founding director of the PROMISE: Maryland’s Alliance for Graduate Education and the Professoriate and her commitment to achieving greater diversity and inclusion in technical fields. Learn more.

The University of Wisconsin-Platteville Women in Engineering, Math and Science Program

In recognition of WEMS’ exceptional and enduring commitment to developing programs for the recruitment, retention and professional success of women in the STEM fields. Learn more.

For their success in the development and implementation of programs that focus on the recruitment, retention, and graduation of women and minorities in engineering. Learn more.

In recognition of sustained success in deploying integrated programs for faculty, pre-college, undergraduate, and graduate students to increase the diversity and success of populations underrepresented in engineering. Learn more.

In recognition of their long-standing commitment to supporting women in their engineering pursuits and of their collaborations with alumnae and nonprofit partners to engage diverse pre-college student populations in STEM. Learn more.

In recognition of a pioneer and champion of diversity whose lifetime of service and leadership in engineering education has created opportunities for generations of underrepresented and underserved students to earn degrees from ABET-accredited engineering, engineering technology, and STEM programs.

For successful creation, implementation, and growth of annual events and programs focused on inclusion of underrepresented populations into the field of engineering, including Introduce a Girl to Engineering Day, reaching 1 million K-12 girls annually; the Global Marathon For, By and About Women in Engineering and Technology, a ìvirtual town squareî connecting women via live Internet chats, webcasts, and local events; and Future City Competition, reaching over 33,000 middle school students (46% of all participants are girls) in 36 regions across the country. Learn more.

In recognition of implementing initiatives and programs to dramatically increase the number of underrepresented minority students prepared to engage and excel in engineering education; being the nationís largest private provider of scholarships for underrepresented minority students in engineering; and collaborating with educational partners to launch a national network of urban-centered, open enrollment, high school engineering academies to provide all students with a strong science and math education to assure college readiness for engineering study. Learn more.

For their successful development and on-going operation of programs to provide encouragement and support for diversity in engineering through pre-college programs, recruiting efforts for prospective students, and programs to support current underrepresented engineering students. Learn more.

The Michigan College and University Partnership

The Bourns College of Engineering at the University of California, Riverside

In recognition of extraordinarily successful initiatives for recruiting undergraduate and graduate students from diverse and disadvantaged backgrounds, retaining them through the bachelor’s degree, and advancing them to graduate studies and careers in engineering. Learn more.

In recognition of the creation of a unique engineering program formed from the partnership between a Research-1 and a historically black university that has succeeded by being among the top five engineering programs in bachelor’s degrees awarded to black students as well as among the top ten in graduate degrees, and for successfully serving more than 40,000 diverse middle and high school students through outreach programs.

The College of Engineering and Computer Science at California State University, Fullerton

The College of Engineering and the Office of Diversity Initiatives at Embry-Riddle Aeronautical University, Daytona Beach

For the successful, broad, and ongoing spectrum of initiatives, including K-12 Outreach, Bridge Programs, Curriculum Enhancement, Faculty Development, and Work-Life Balance, to attract women to science, math, and engineering, to retain them through graduation, and to support them as they embark on their professional careers. Learn more.

For its commitment and achievement in hiring female faculty and in recruiting, retaining, and graduating a significant number of women in undergraduate and graduate engineering programs while providing the graduates with leadership skills and opportunities as they enter engineering practice. Learn more.

For the development and operation of a successful hands-on, project-based university campus summer program for underrepresented high school students and their teachers that increases awareness of information technology skills and careers and enhances the students’ aspirations for a college education. Learn more.

For their long-term and collaborative efforts to aid African-American, Hispanic, Native American, female, disabled, and first generation students in engineering, computer science, and construction management in enhancing their academic performance and reaching their full potential.

For previous and ongoing promotion of MESA (Math-Engineering-Science Achievement), including sharing procedures and techniques with a broader audience in promotion of math, engineering, and science among underrepresented groups.

For success in promoting and including American Indians in the engineering and science disciplines and promotion beyond the campus borders.

For working with the nation’s tribal colleges and universities (TCUs) to create the first comprehensive program for developing, implementing, and sustaining engineering studies ever designed by and four TCUs, seeking funding for the plan’s implementation, and engaging major engineering organizations such as ABET and the National Academy of Engineering to further its success.

The College of Engineering and Computing at Florida International University

For success in educating and enriching the K-16 population of FIU and its surrounding Miami Dade County through bridge programs, dual enrollment, scholarships, undergraduate research experience, and an annual open house event, Engineering Gala, that is attended by more than 1,000 local middle and high school students; and for graduating more Hispanic engineers and computer scientists than any other college in the United States (excluding Puerto Rico). Learn more.

For providing a supportive atmosphere for its diverse student body and actively encouraging young women to enter the field of computing by hosting the annual Women in Computing Symposium and the Trendsetters Conference on Nontraditional Careers. Learn more.

For its commitment to providing engineering and science education to a predominantly Hispanic, economically disadvantaged region by extending outreach to precollege students, parents, and teachers in El Paso and in Ciudad Ju·rez, Chihuahua, Mexico, steadily increasing the enrollment of engineering students from the area and attracting more underrepresented or economically disadvantaged students to technical disciplines. Learn more.

The University of Maryland, Baltimore County

For its distinction in producing more minority faculty than any other institution in the United States, which is critical to the growth of minority representation in the breadth of colleges and universities throughout the country. Learn more.

For its impressive record in attracting and graduating minority students. During the 2002-2003 academic year, the college conferred 160 bachelor’s degrees in engineering, and nearly half of them, 76, went to minority students. Fifty-eight of those degrees, or 36 percent of the overall total, were awarded to Hispanic students. The UTSA College of Engineering was recognized for this accomplishment. Learn more.

For developing a cooperative program between Tulane University and Xavier University of Louisiana, a Historically Black University, whereby students from Xavier take classes at Tulane in their senior year in preparation for entering the industrial hygiene masterís program at Tulane the following year. Learn more about Tulane and Xavier.