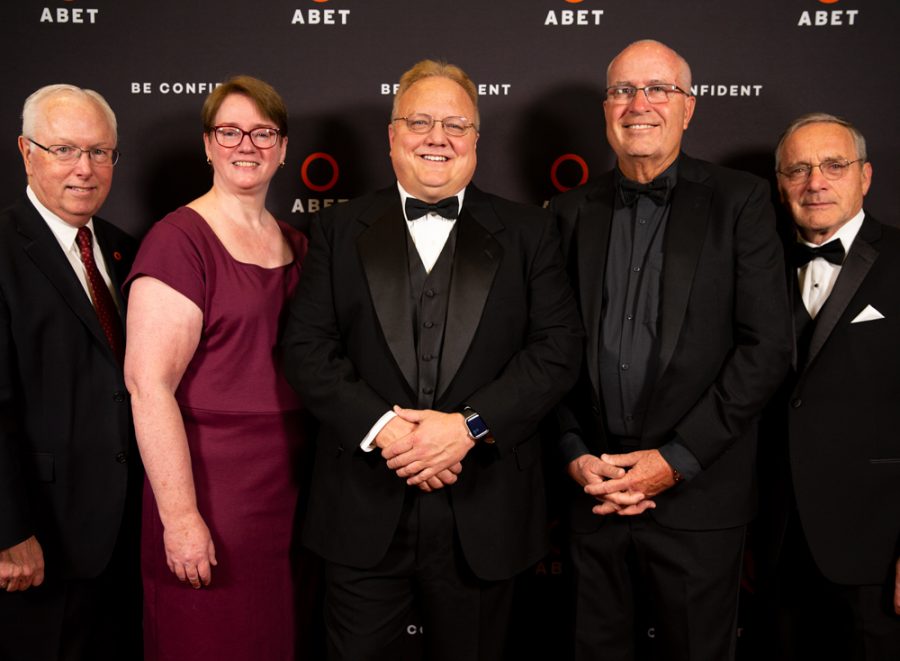 Every ABET Expert promotes confidence in technical education. But those who truly embrace the power of our work and have a clear impact are named ABET Fellows.

The distinction of ABET Fellow is an honor that is conferred by our Board of Directors. It recognizes individuals that surpass normal expectation by dedicating notable time and effort to achieving our endeavors. Wayne Bergstrom is a Principal Engineer and Assistant Chief Civil Engineer at Bechtel Infrastructure and Power. With more than 40 years of engineering experience in government service, private practice and EPC/turnkey design, he has had the opportunity to support critical infrastructure projects throughout the US and around the world. A registered professional engineer in five states, he has been named a Diplomate, Geotechnical Engineer by the Academy of Geo-Professionals and is a Fellow of ASCE.

Bergstrom began his ABET service in 1993 as a civil engineering program evaluator, and eventually served on 21 national and international evaluation teams, either as an ABET Program Evaluator or as Team Chair while a member of the Engineering Accreditation Commission. During his subsequent eight years on the ABET Board of Directors, he served terms on most of the Directors’ standing committees, as well as the Global Council, Governance Structure Task Force 4, Building Acquisition Committee, and former Board Executive Committee. Chosen as President-Elect in 2015, he was the first Chair of the Board of Delegates under the restructured governance system and was ABET’s 2016-2017 President. Scott Dunning is a professor of electrical engineering technology and director of the University of Maine School of Engineering Technology. He worked in industry as a power systems engineer for both General Electric and Bowater before joining academia. He previously served as the executive director of the Advanced Manufacturing Center at the University of Maine. He is a Fellow and previous national president of the Association of Energy Engineers (AEE). He is Chair of the Engineering Technology Council and a member of the Board of Directors for the American Society for Engineering Education (ASEE). He has authored multiple texts in the field of energy management.

Dunning has participated in 28 national and international program evaluation visits for the Engineering Technology Accreditation Commission (ETAC) of ABET since the 1990s. He served in each role of the Executive Committee officer chain of ETAC and also served several years as a support facilitator for program evaluator training. Jeffrey R. Keaton specializes in quantifying hazardous natural processes for siting and design of all types of facilities in all geologic environments and is particularly interested in quantifying uncertainty and variability in geologic observation and characterization. He has degrees in geological engineering, geotechnical engineering, and geology from University of Arizona, UCLA, and Texas A&M University, and is licensed as an engineer and as a geologist. Keaton has been employed by consulting firms for over 45 years, and in Wood’s Los Angeles office since 2005, where he is a principal. Ann Kenimer is the associate provost for undergraduate studies and a professor in the Department of Biological and Agricultural Engineering at Texas A&M University. She is a registered professional engineer in the State of Texas.

Kenimer has volunteered with the Engineering Accreditation Commission (EAC) of ABET since 2002. She has served as a support and lead facilitator for program evaluator candidate training since 2011, and also represented ABET as chair of a Washington Accord periodic review committee in 2017. Kenimer has served as a committee member and chair for the Southern Association of Colleges and Schools, Commission on Colleges. She is a Fellow of the American Society of Agricultural and Biological Engineers (ASABE), a former member of the society’s board of trustees, and a current member of the ASABE Foundation board of trustees. He began his service to accreditation in 1987 and has served on numerous visits as a program evaluator or as a team chair both domestically and internationally. Martin served as chair of CSAC prior to the integration of CSAB and ABET. He also served as CSAB President during the integration and helped lead the growth of these two successful organizations. Currently, he serves as the senior member of the Computing Area Delegation.

The ABET Fellow Award, like all other ABET Awards, is given to a nominee selected by his or her peers. To learn more about the process and criteria involved, or to nominate one of your peers, download and review the nomination kit below. The deadline for nominations is April 20th, and only complete nominations with references will be accepted.

Fellow award winners will be recognized at the 2020 ABET Awards in Baltimore, Maryland, on October 30, 2020. ABET will cover round trip travel and accommodations for award recipient and a guest to attend. Fellows will also be featured on our website and social media pages, as well as recognized in a press release.