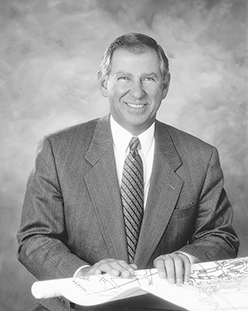 C.R. “Chuck” Pennoni claims there is no substitute for experience—his life models this adage. Pennoni would not have been able to create his business, nor hold multiple positions in higher education, if it were not for his ability to juggle academia and industry while remaining highly invested in both. His avant-garde ambition has solidified his place as a leader in both fields.

“I want to make a difference wherever I go,” he says, with a strong sense of purpose. Keeping the importance of investing today for tomorrow’s successes, the son of Italian immigrants has built his career upon maintaining a calculated balance between academia and industry and between innovation and timeless business practices.

Always a dedicated student, Pennoni completed his bachelor’s and master’s degrees through full-time, part-time, evening and correspondence classes. He began at Pennsylvania State University; he attended for three years before meeting his wife, Annette, and transferring to Drexel University Evening College. There, he received his bachelor of science degree in civil engineering and continued part-time for a master’s in civil engineering. He would later return to his alma mater as a trustee in 1993 and as interim president from 1994 to 1995 and from 2009 to 2010. His fourth and final educational experience was through a pre-Internet correspondence school.

Looking back, Pennoni regards the numerous ways in which he was taught as strong influences on how to run and operate his business, Pennoni Associates, one of the nation’s top engineering firms. Now a robust civil infrastructure systems-focused corporation, it has over 1,200 professionals in more than 34 locations across the U.S.

An Engineer Enters the Business World

His passion for business was evident early on. “I was infatuated with the entire thing! Business is when you sit down with the owner and discuss concept,” the veteran engineer turned businessman exclaims with youthful enthusiasm. “You’re not doing yourself justice if you jump to saying, ‘This is what I want,’ as opposed to sitting down with a professional and discussing what you’re trying to accomplish and then coming back with ‘What do you really need?,’” he adds with the self-assurance only decades of experience can bring,

Pennoni felt the promise in civil engineering long before he recognized that this pull was also a passion. “I always wanted to build things and I like structures, so civil engineering with a structural major was something I always focused on.” Now with a career spanning more than 60 years in civil engineering and structural design, the successful entrepreneur can say with confidence he built what he loved and loves what he built, while not compromising his core values of Honesty, Integrity and Service.

Pennoni’s drive and determination are what run his company and professional life. He has served simultaneously on multiple boards and is past-president of American Society of Civil Engineers (ASCE) and ABET. He adds, “When you volunteer in the professional community, it really helps your confidence. You’re out there with all the leaders in your profession and you learn from every one of them.  I gave a lot of years, but I got a lot back—I learned a lot, from programs and people, about what they do and how they do it.” 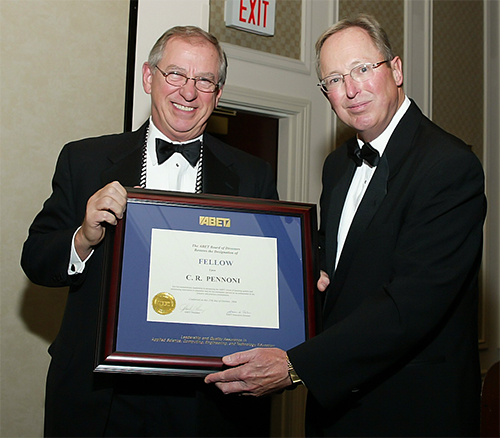 Pennoni appreciates the correlation between upholding standards and the resulting performance. “Any entity, whether it’s a private business, an educational institution or a government agency, if there is no standard set, things could fall behind. So when you set a standard, you’re setting a bar for people to reach and say, ‘OK, I want to reach that bar. I don’t want to be left behind. I want to be there too,’” he shares with poise.

Pennoni is an ABET Past-President (1998-1999) and a 2004 ABET Fellow. He’s also the Founder and Chairman of one of the nation’s top engineering firms, Pennoni Associates, and he has been named 2017 Engineering Leader of the Year by Drexel’s College of Engineering. In 2000, Pennoni was inducted into the National Academy of Engineering, an honor bestowed on less than one-tenth of one percent of all U.S. engineers.