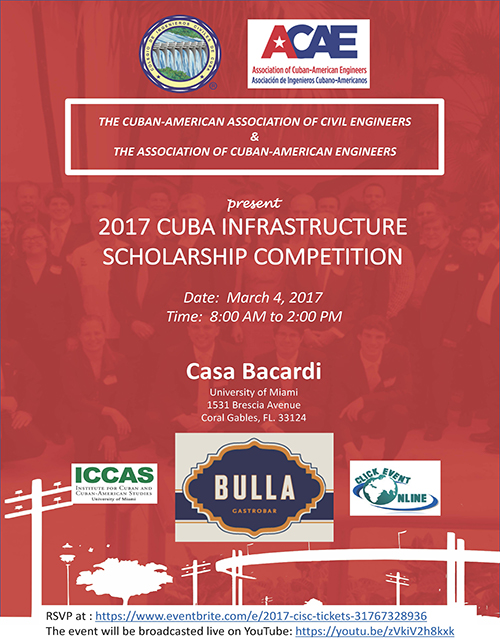 This year, the event has drawn a wide variety of state and out-of-state universities with 15 teams representing 10 universities and totaling 52 engineering students, all vying for a total of $12,000 in cash prizes plus non-tangible incentives like mentoring and networking through the competition organizers.

First held in 2010 with three teams representing Florida International University (FIU), the University of Florida (UF), and the University of Miami (UM).  The competition has grown not only in number of participants and sponsorship commitments, but also in cash prizes, which have increased from $1,750 in its first edition to a total of $12,000 this year thanks to the support of Bulla Gastrobar, a Florida restaurant.

Growth comes with time and experience, student outreach efforts and perseverance from organizers who strongly believe in leaving a legacy with the next generation of professional engineers. In addition to Bulla Gastrobar, the event is sponsored by the Institute for Cuban and Cuban-American Studies and Click Event Online.

The Cuban-American Association of Civil Engineers Inc. (CAACE) is a non-profit corporation organized under the laws of the State of Florida on March 4th, 1961. The purpose of the association is to assist members in the maintenance of the highest professional engineering skills; to support the highest principles of professional engineering achievements and to obtain the advancement of the science and profession of engineering. Community involvement includes local government technical boards and committees, social services and charitable organizations. Guest speakers at monthly meetings present talks on technical, cultural or other topics of both national and local importance.

The Association of Cuban-American Engineers (ACAE) was founded in January 1961 through a gathering of Cuban exiles in Miami who set out to help those in their profession. Currently the ACAE fulfills its mission to help those in their profession by promoting engineering education, providing networking opportunities, and most recently addressing engineering-related issues in Cuba’s future, specifically with respect to the physical infrastructure. The ACAE promotes engineering education by encouraging student chapters of ACAE at local universities, and by promoting scholarship programs that award thousands of dollars in scholarships yearly to students of Hispanic and/or Cuban heritage. Networking opportunities are facilitated by the organization through its annual gala, which brings together over 300 engineering professionals to celebrate achievements of local engineering professionals and to be a part of an awards ceremony.

The Cuba Infrastructure Scholarship Competition, which includes a light breakfast and lunch, is free and open to the public, but reservations must be made in advance by going to https://www.eventbrite.com/e/2017-cisc-tickets-31767328936. The event will be held starting at 8:45 AM, on Saturday March 4, 2017, in Casa Bacardi on The University of Miami Campus. The event will also be broadcasted live on YouTube: https://youtu.be/zVkiV2h8kxk.