In whatever Barbara Price takes on, she dedicates herself to fully.  The veteran university professor immersed herself from the very start of her time working on ABET accreditation, and it should come as no surprise that she dedicates herself in the same way to every other aspect of her life. Most people recognize Price from her role as lead and support facilitator at Program Evaluator Candidate (PEVC) training, or as Team Chair (TC) and former Chair of the Computing Accreditation Commission (CAC), but few know of her active community involvement outside of ABET. 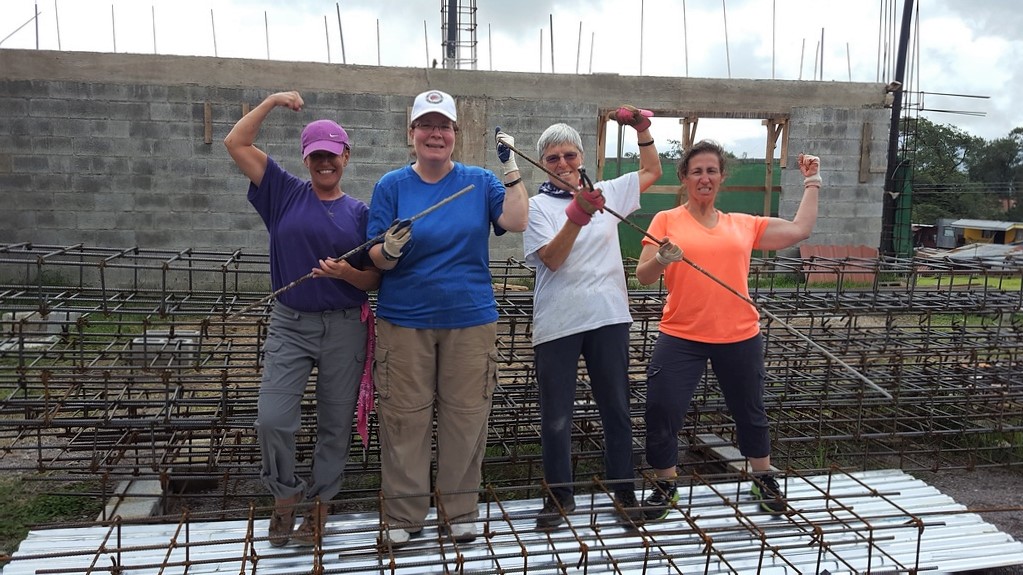 Price (second from right) has participated in eight mission trips throughout her life. Here, she is pictured in Costa Rica where she manually bent steel reinforcing bar while helping to build a school for a local orphanage. Her group was dubbed the “Women of Steel.”

Recently retired, she moved to Huntsville, Ala. in 2015 with her husband, Stan, and now dedicates her time helping youth causes both at home in the Rocket City and abroad. Her post-retirement volunteerism began by transferring her membership to the Kiwanis Club of Huntsville. Price is glad her son encouraged her to join Kiwanis when the male-only organization started admitting women. “Essentially, we work with the children of the world— we try to do things for the children and that’s something I really enjoy being involved with,” reflects Price, who now serves on the Board of the Huntsville chapter.

“I don’t think any kid is a throwaway kid,” Price asserts in her southern accent, her voice emanating from a petite frame. She speaks in a way that makes everyone in the room want to listen, as she articulates each point clearly and confidently.

And, while she’s spent the past five decades below the Mason-Dixon Line, she’s originally from “where the steel mills and coal fields are” in Western Pennsylvania. All four of her grandparents moved to the same area of the state after emigrating from different parts of Hungary in the early 1900’s. 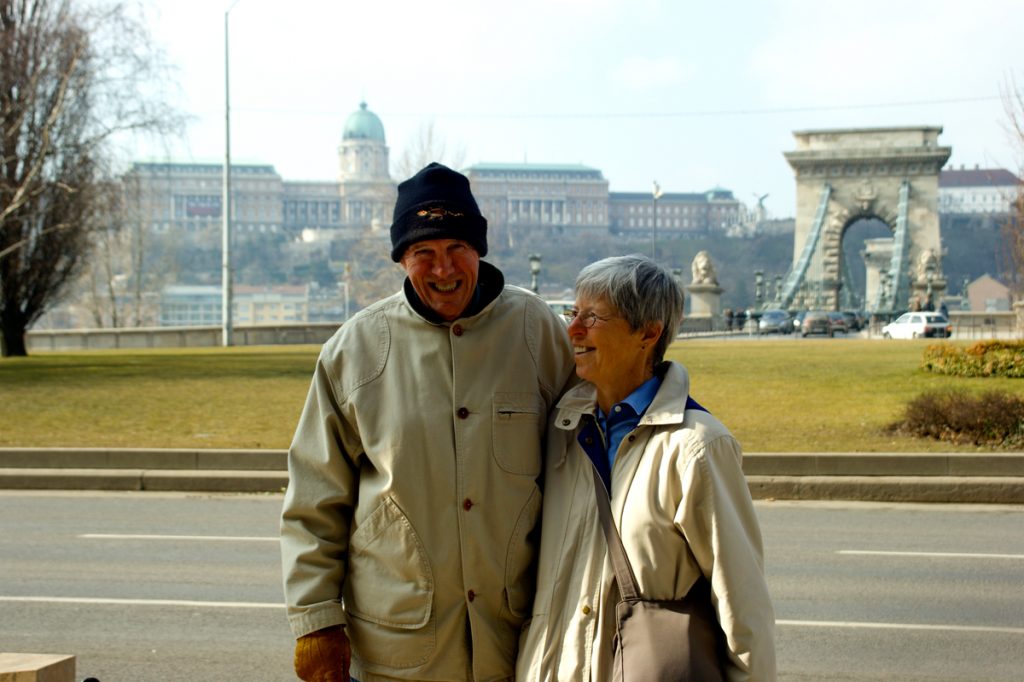 Price with her husband, Stan, in Budapest.

Having grown up in a big Hungarian family and attending a Hungarian church, until she went to school, she thought everyone spoke Hungarian.

Though she left her tightknit Hungarian community to pursue higher education, she remains connected to her heritage, in many ways thanks to the Fulbright Program. Price has been fortunate enough to receive two Fulbright placements in Hungary. The first was on a Fulbright-Hays Group Program in 2008, and after seeing Price in action, the head of the Fulbright Commission asked her to apply for a full Fulbright teaching grant. So, she returned to Hungary in 2011 to teach Econometrics and Managerial Decision Analysis at the University of Debrecen, which is close in proximity to where her mother’s family originated. 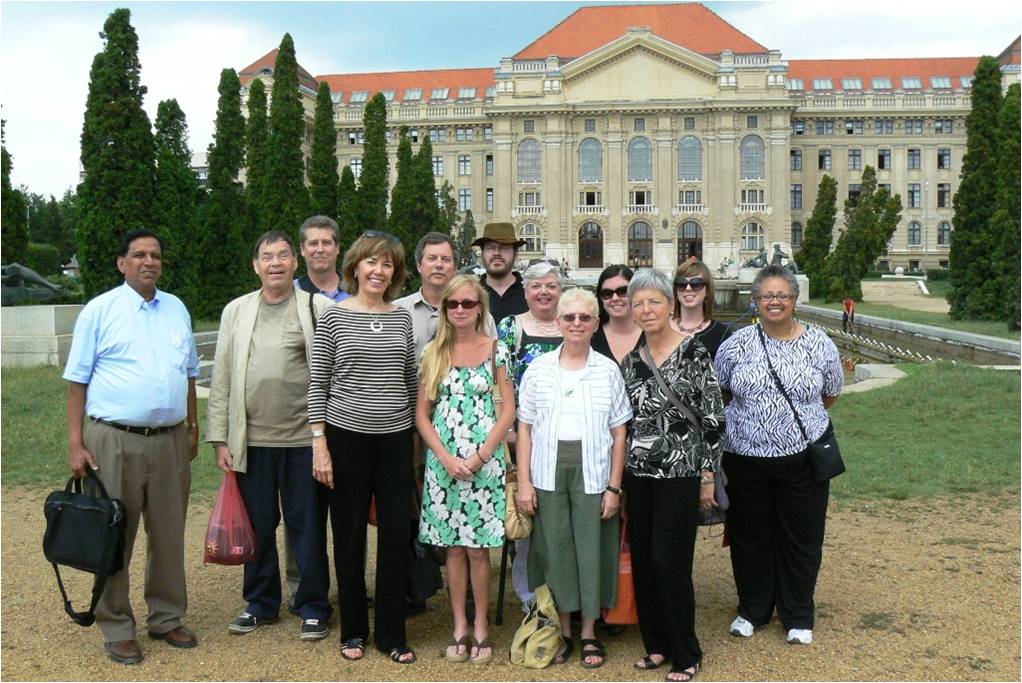 The 2008 Fulbright-Hays team at the University of Debrecen.

It was through a talk at a Kiwanis meeting that she got involved in the Court Appointed Juvenile Advocate (CAJA) program, an issue she had always been interested in, but never had the time until retiring. After eight weeks of training, CAJA volunteers are appointed an abused or neglected minor that has been removed from their parents’ or grandparents’ care, and advocate to ensure that the child’s best interests are advanced. Essentially, Price tries to understand what the child’s needs are through visits and by gathering the information she needs to assess their needs. Then she goes to court every three months to make recommendations to the judge and lawyers, based on the information she has gathered.

But her community involvement doesn’t end there— Price is also President of the Resident Association of her retirement community, Magnolia Trace, and volunteers at the Von Braun Center.

Though she’s now fully integrated herself in Huntsville life, until moving to the area in 2015, she had spent the past 20 years at Georgia Southern University (GSU), an hour’s drive west of Savannah, Ga. But the opportunity to be closer to her son, daughter-in-law and two grandchildren, four and six years old, led her to Alabama.

Price has played major roles in shaping computing and online programs, both as Founding Director of GSU’s School of Information Technology and in her involvement with ABET. But, after getting a doctorate in statistics from Virginia Tech, she taught technical classes at business schools until GSU asked her to help create an Information Technology School.

Now a force in computing accreditation, her path hasn’t always been easy. A precocious student, she excelled in mathematics, but couldn’t win the high school math award because it had to go to “the best male math student” (though she was able to go home with the history award). And when Price walked into her first graduate course at Virginia Tech, the professor looked at her and said “Miss, Home Economics is across campus. You are in the wrong place.”

Undeterred, the first-year graduate student replied, “Well, you know, I think I’ll just stay,” as she took a seat in the classroom.

This situation exemplifies Price’s confidence and can-do attitude. She has never let instances like these get in the way of chasing her dreams, even as a young female grad student. “That’s just the way it was. You couldn’t let it bother you, or you’d get nowhere,” Price reminisces. She now encourages her students to find what they are good at and pursue it.

Growing up, Price was taught that she could do or be anything, if she put her mind to it. As the eldest son during the Great Depression, her father had to abandon his education in fourth grade to help provide for his family. But he knew perfectly well what he wanted for his children. Before passing away prematurely at the age of 45, when his youngest daughter was just 12 years-old, he made sure she knew that going to college was never a question. And his legacy lives on, through his daughter, who not only graduated from college but went on to achieve her Ph.D., and carries on through his grandson, who graduated with a J.D. from Harvard Law School.